Cock-a-doodle-doo, you sneaky post-it sucker’. Ivan’s innocent game of secretly sticking yellow notes with stock tips all over the big investment bank is over. Senior trader Stef catches him red-handed and pulls him out of the stuffy research department into the buzz of the dealing room. To Ivan the market is a big game. He is a true number cruncher and ‘surfs the waves of the stock market’ like a natural trader. As he rakes in big profits for the bank, he moves into a fancy apartment towering above the financial city. Suddenly the playful talent has become visible to the beautiful Deniz, who works downstairs. But all is not well. The new job gives Ivan sleepless nights. Nothing else to do but get up and start walking. Past the city of glass, across the tunnel he walks, he roams the old city. As Ivan rapidly becomes the most successful trader in town, he feels increasingly alienated from himself and the world around him. Nobody but the Korean trader Paul seems to understand his desolation. But as Paul starts to lose money, the two young men lose touch. On his nocturnal rambles Ivan passes by frayed characters of the old city: a teenage prostitute, an African pastor, a psychotic bum. Dead tired and confused he frightens off Deniz, but still goes on winning in the dealing room and becomes a senior himself. In spite of his unprecedented success Ivan has to get out. Before it’s too late.

WIN/WIN was selected by 40 festivals. Lead actor Oscar Van Rompay has won the Best Actor Award for his portrayal of Ivan at the Brooklyn International Film Festival 2010. The film’s screenplay by Jaap van Heusden has won the 2010 Prix Europa Geneve Script Award. 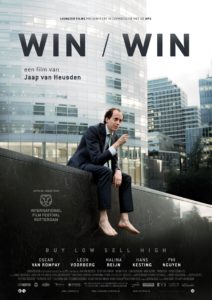