Sam works as a security guard in a shopping mall. His job is boredom incarnate. He basically just hangs around all day. His tall bulky physique and uniform lend him enough authority to avoid any serious trouble. One day Sam wakes up, quickly gets ready, grabs some food, and jumps on the bus. It’s a quiet, ordinary day at the mall; people walking in and out, just another unremarkable day. Sam is outside, wandering around, watching the birds examine a smoldering cigarette butt. A young man carrying a backpack walks past Sam. There is nothing exceptional about the man; he is just another face in the crowd. As he enters the mall, Sam, having no clue of what is about to happen, eyes him absent-mindedly. Then, all of a sudden, the young man explodes, utterly destroying large parts of the surroundings.
In no time, the building is on fire, people are wounded and dying. Sam, who has fallen on his back, has trouble getting up. Numb and bewildered, he staggers around the scene of the explosion.

He drags a woman outside against her will. She is screaming, struggling to get back inside to save her child. Sam goes back into the building, trying to rescue other victims, all of them just as helpless as he is. They are strewn all over the floor, their clothes shredded to pieces, feeling utterly lost. Another man, Jan, is also trying to help the victims. Shoulder to shoulder they run in, dragging survivors out of the mess. And then Jan is crushed under a chunk of concrete which crashes down on him, his body is literally pulverized into a bloody pulpy mass. Sam is overwhelmed by fear and panic. First there was the shock, now there’s the realization of what has happened. Without thinking, he starts to run, turning his back on the apocalyptic scene. He flees, running along the streets of a city that once felt as familiar as a friend, but now seems more like a dark monster.

22 mei is a Belgian/German/Dutch co-production with CCCP. It’s Koen Mortier’s second feature film. The project has already been granted support from the Flemish Film Fund and the Dutch and Rotterdams Film Fund. 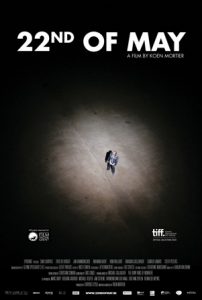