AMOR shows, in a number of fragmentary scenes, moments of a day in the lives of a group of teenage girls in the outskirts of a big city in the Netherlands. In a contemplative style the short film outlines the lack of love in their daily lives, in its broadest sense. Not only does the film focusses on the cold relations between the group and their environment but also explores the relationships within the group itself. 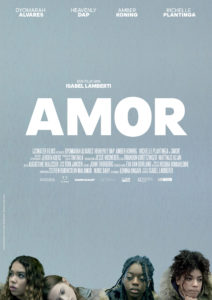