Go Daan Go! is a short film about nine-year-old Daan, who really gets excited about taking up swimming once he discovers his mother’s old swimming medals in the attic. When his school teacher encourages him to join the nearest local swimming club, Daan finds out that his mother is definitely not amused. She is afraid that Daan inherited her cardiac problems. She is not at all confident that he can take up physical sports. She suggests that he should take a medical test before he starts training for the Youth Olympic Games of 2018. Despite his mothers fears Daan doesn’t wait and starts training behind her back. Will Daan’s dream come true? Will his parents support him and is his mother able to deal with a dream that in the past turned out to be a nightmare for her? 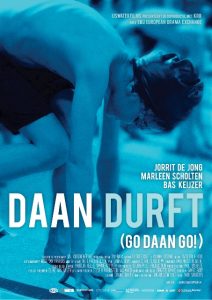