KABAM! is a children’s series about the pupils from class 3A. The kids differ from each other, but they all have one thing in common: they are afraid sometimes. Luckily, every child has a rich fantasy, which helps them to overcome their fears.

Children’s series by Floor Paul & Lilian Sijbesma (screenplay) and Elisabeth Hesemans (director). Co-production with KRO-NCRV and with the support of the NPO-fund. 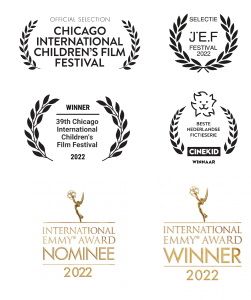